Some of the more interesting weather events of 2012

August 2012 – Tropical Disturbances: To many to choose from during the month, so here is the whole month. August 4 thru 30 2012 Archive *Note: The tropical page linked in many of these posts has no data so don’t bother clicking through. It’s only used to post current data when storms are active.

October 2012 – Hurricane Sandy – Hurricance Sandy Archive *Note: The tropical page linked in many of these posts has no data so don’t bother clicking through. It’s only used to post current data when storms are active.

November 21 2012 – Last post of the year on Georgia Drought – No Improvement – Georgia Drought Update – I expect the Drought update for this week [ January 3 2013 ] and the beginning of the new year will show some improvement after recent rains.

December 23 2012 – Forecast for Christmas Storms – Christmas Severe Weather Event in the Southeast – December 25 2012 – While the local area was spared again, others in the southeast were not as lucky.

At 940mb, Sandy is now the strongest hurricane recorded north of North Carolina!

Time of the center making landfall likely 5:00 to 7:00 PM EDT.
Per a tweet at 1:01 PM EDT Today from Dr. Greg Forbes @DrGregForbes from the weather Channel: “Sandy is speeding up, moving northwest at 25-30 mph. It could make landfall south NJ around 5PM. Hurricane winds approaching NJ, south NY.”
*Note: At the source link, timestamp is wrong. source: https://twitter.com/DrGregForbes/status/262962284517801984

Winds continue to increase with Sandy. Estimated wind speed at landfall or before the center moves inland are near 100 mph. Wind gusts of 50-60+ mph are being reported along the NJ, NY, MA coasts and gusting to 66 mph at JFK Airport in NYC. Numerous power outages are coming in from various news sources with reports of 150,000 without power. This will continue and worsen as Sandy nears landfall south of Atlantic City.

[Cross posted from Foot’s Forecast: The Tropical Zone, time is short, info current as of 8 AM EDT]

Good morning folks. We hope you are as prepared as you can be. If not, you should be finalizing your preparations as time is running out for you to do so. Heed all warnings and advisories issued by your local weather service and media outlets. Sandy is now expected to be a ‘strong Category 1 Hurricane with winds of 90 mph at landfall’. At this time we have determined Sandy [the center] will make landfall in the area of northern Delaware and Southern New Jersey, in the Delaware Bay early Tuesday morning. When Sandy goes Post-Tropical later today, the Foot’s Forecast: Severe Storm Center will be issuing updates and they will be shared with Foot’s Forecast: The Tropical Zone. 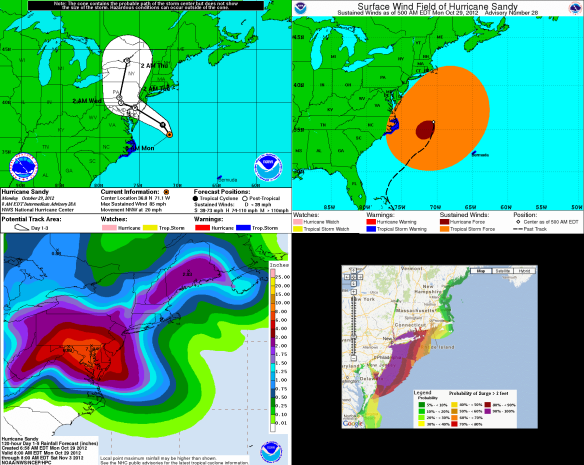 Winds in and around the area ‘could be stronger’ or weaker. It all depends on how strong Sandy Gets.: Winds as strong as but not limited to ‘Hurricane Force [74 mph to 95 mph / Category 1]’ strength will reach the Mid-Atlantic states including New York City and Long Island ‘later today’. Elevated Winds will likely be ‘Stronger’ than those near ground level. These stronger winds will affect the ‘upper floors of high rise buildings’. Stay away from the windows if you live on upper floors. Winds may also be stronger due to the funneling effect caused by buildings and other structures. Tropical Storm force winds [39 mph to 73 mph] and or Gale force Winds [39 mph to 54 mph] are already being felt from North Carolina ‘northward’ to Long Island. These winds are expected to spread to other areas of the Mid-Atlantic coast, New York City and Southern New England later this morning and today.

Storm Surge measured ‘above ground’ – It ‘could be more’ or less. It all depends on the timing [high tide/low tide] and how strong Sandy Gets. :
Long Island Sound / Paritan Bay / New York Harbor – 6 to 11 Feet
Fron Ocean City Maryland to the Connecticut / Rhode Island Border – 4 to 8 Feet
North Carolina North of Surf City including the Pamlico and Albemarle Sounds – 4 to 6 Feet
Connecticut / Rhode Island Border to the South Shore of Cape Cod including Buzzards Bay and Narragansett Bay – 3 to 6 Feet
Southeast Virginia and Delmarva including the Lower Chesapeake Bay – 2 to 4 Feet
Cape Cod to the Massachusetts / New Hampshire border including Cap Cod Bay – 2 to 4 Feet
Upper and Middle Chesapeake Bay – 1 to 3 Feet
Massachusetts / New Hampshire border to the United States / Canadian Border – 1 to 3 Feet

Be sure to check out cataulagawx.blogspot.com for more Weather Products and Useful Links not found here. Thanks ~ Ed

Watts Up With That?

The world's most viewed site on global warming and climate change